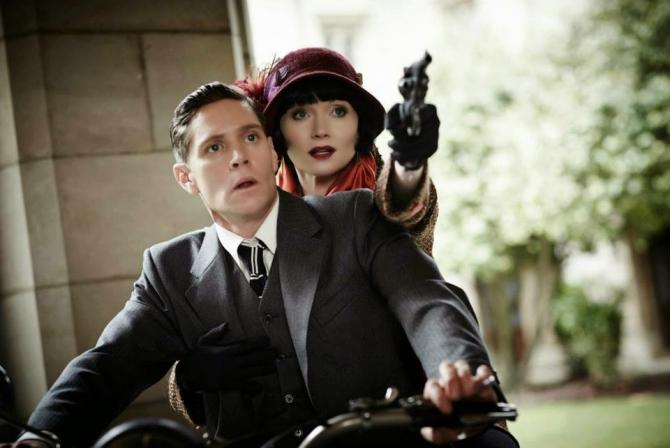 Click here to view the other great blogs on the MFRW Hop!

There’s nothing quite like flirting over a dead body. In Miss Fisher’s Murder Mysteries – the Holy Grail of will they or won’t they, title character Miss Phryne Fisher and Inspector Detector Jack Robinson, know how to make murder sexy.

It’s little surprise that I can’t get enough of this show. There’s fantastic jazz music, the early women’s lib movement, and two main characters that could turn a morgue into a boudoir with a naughty wink and a pair of handcuffs. Miss Fisher’s Murder Mysteries has become one of my all time favorite television shows. It’s the feel-good show I turn to when I’m home sick or in a funk, and I’ve been treasuring my last unwatched episode like a golden nugget. Honestly, it’s a must watch for anyone who loves great costumes and hot detectives.

But where I treasure Miss Fisher, I binge Criminal Minds. There are still dead bodies, still unresolved sexual tension, but definitely an altogether different viewing experience. I could easily watch four episodes of this show without even realizing it, and I only recently figured out why.

I was scanning some author related posts on Pinterest, when I got caught up in a loop of Myers Briggs and Enneagram tests, personality quizzes that delve deep into the factors that make up human personality and individuality. Somewhere in my black hole of self-examination, I realized that I love Criminal Minds, a television program that focuses on the behavioral analysis unit of the FBI, because despite the lack of bullets, serial killers and paycheck, our jobs are not so different.

I’m not likely to do a deep psychological analysis on a mass murderer anytime soon, but the role of an author requires many similar tactics. It’s absolutely necessary for me to delve deep into the characters I write, to understand who they are and why they do what they do and say what they say. Is there something in my hero or heroine’s past that would directly affect how they perceive situations, actions or questions? Are they open to their environment, or closed off from the people around them? Criminal Minds is a fun, fictional way to engage those same skills in a different environment. While I recognize that, like many police procedurals, Criminal Minds often sacrifices fact for a better story, it’s still a fun and interesting program – and Derek Morgan certainly doesn’t hurt to look at.

There’s one more show that I’ve become so damned obsessed with that we’re literally going through our second binge-watch in less than three months. (It’s a five season show! We’re talking over one hundred episodes here!)

Go out. Watch it right now. For anyone who loves imagination, white collar crimes, and bad guys getting what’s coming to them, you have to watch it. A modern Robin Hood, with stealing from the rich and giving to the poor, Leverage is fun, exciting, full of absurdities and altogether how I wish my life had turned out. It’s a show you just can’t be sad while watching.

I’ve been trying to redirect my bedtime routine towards reading, rather than watching, but there are some fantastic shows that I’m pleased to say I love. I certainly won’t deny that they’ve have impacts on my storytelling, characterization and world-building – the most fun kind of research there is! We’re very lucky to live in a time when television has become such a remarkable and creative genre all its own. I look forward to finding my next favorite show.