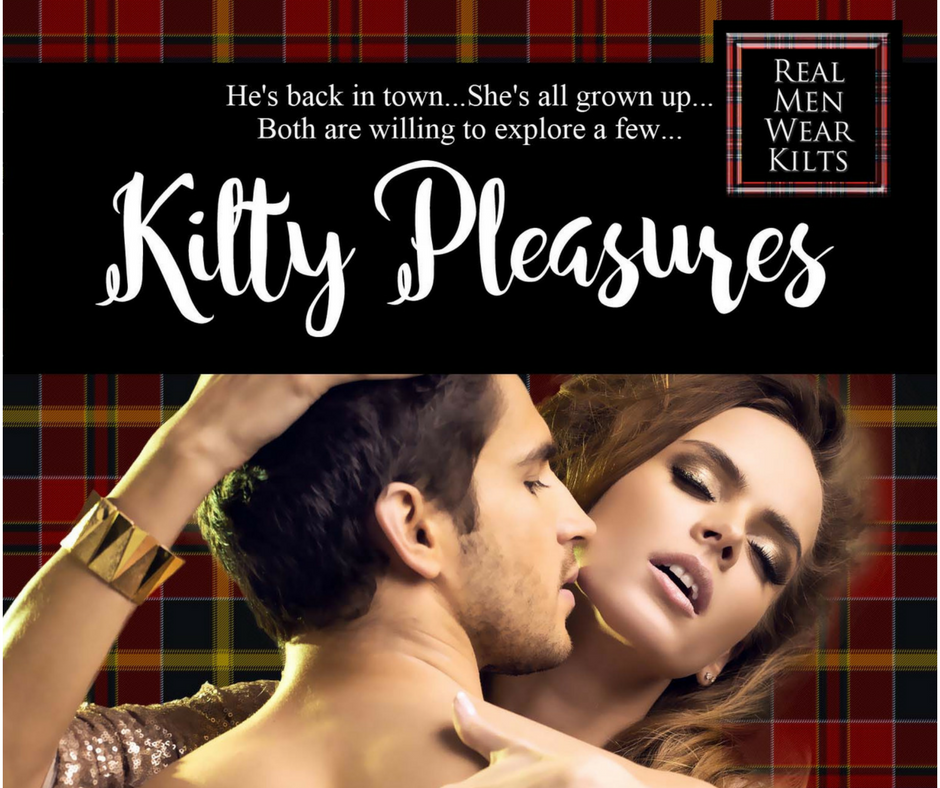 Nancy Fraser stopped by to talk writing and tell us about her recent release, Kilty Pleasures!

Grade 8. I had a fantastic English teacher who encouraged me to let my muse loose. My plan was to write short stories and poetry. Romance was never part of plan until the day I made a crack to a co-worker that “anyone can write one of those”. She dared me to try and, three chapters later, I was hooked!

Probably my first book signing. I was so overwhelmed that someone wanted my autograph that I had to keep a box of tissues at hand.

I’ve had a start-stop-and start again career. I sold my first book in 1996. The next year, I was divorced and had to go back to work full time. I still wrote but not to the quality/quantity needed for publication. I didn’t sell my second book until 2006, followed quickly by 4 more sales. Then, I took another break in 2009 for health issues, and didn’t sell again until 2012. My 25th, 26th, and 27th book come out later this year, so I’m slowly catching up.

In 2014 I moved to a larger condo so that I could have a home office. I love my creative nook and have one wall dedicated to my framed book covers and awards. I’m definitely a coffee drinker … 4 or 5 cups a day! I try not to snack at my desk because I find I overdo it because I’m engrossed in what I’m writing.

Right at the moment, I’m putting the finishing touches on a vintage (1970’s) retelling of the Wizard of Oz for my publisher’s new “Stranded” line. The premise of the series is that the hero and heroine find themselves alone/stranded. What better example of being stranded than Dorothy in Oz. The title of my story is Waking Up in Oz.

When Ronan MacAlister returns to Glencoe, Maine to see to the affairs of his late uncle, he’s immediately reminded of why he’s stayed away. The small town is definitely not his cup of tea, and he can’t wait to settle the estate and be done with the cold winters. The only bright spot is the feisty farm manager, Aileen. All grown up now and far from the shy and reserved girl from his childhood, she exudes a steamy sexuality that has Ronan and his unruly body on full alert.

Aileen MacDougall had a huge crush on Ronan when she was a teenager, content to adore him from afar whenever his family came to Glencoe for a visit. Now he’s back, and although the circumstances are less than ideal, she’s eager to find out if her fantasies can live up to reality. But he holds the key to the future of Glencoe in his hands as well as her own hopes and dreams.

Can being trapped together in a remote cabin during a freak snowstorm melt his heart? Or will they discover they have differences even kilty pleasures can’t overcome?

Angus gave another nod toward the table laden with food. “Why don’t I have her make you a plate? You can grab a spot close to the door and still greet your guests.”

“Thank you. I’d appreciate it.”

While he waited for his food, Ronan studied the townsfolk milling around the brightly lit, albeit stuffy, hall. They came from all walks of life. Farmers, store owners, and bankers. The one and only barber…who happened to be the town’s mayor as well. A cross section of exactly what made this place click and the main reason he could never coax his uncle into leaving.

Time and again his gaze returned to the beautiful woman near the far window. She fanned herself with a slim, delicate hand and he wondered how it would feel to have those same fingers caressing his skin. She was a goddess among a room full of middle-aged farm wives and gray-haired spinsters.

When she opened the shutters to let in some air the evening breeze blew her long, reddish blonde hair from behind her ear. The disheveled strands brushed her creamy cheeks and fell like a curtain over her slim shoulders. She tossed her head from side to side, jostling the silken threads until they came to rest across a pair of voluptuous breasts.

He gave his perusal free rein. Her trim waist flared into nicely curved hips. Perfect to hold onto during a long night of hot, satisfying sex. The thought made his palms itch.

Ronan retrieved the bottle of cabernet from his uncle’s stash and pulled the cork. Aileen was giving him some enticing signals…at least it seemed like it. Given his body’s immediate reaction, he hoped he wasn’t reading her wrong.

He busied himself with building a fire from the logs and kindling in the basket beside the hearth. Once he’d finished, he crossed the great room and drew the curtains closed.

Setting a romantic mood, are you? Ronan gave his pesky conscience a nudge and turned the lock on the cabin door.

The soft ‘ding’ of the microwave proceeded the heavenly aroma of pungent spices. Aileen reached for dishes on the shelf above her head, the stretch of her arms outlining her curvy figure, lifting her lush bottom. His stomach growled with an appreciation that had little to do with food.

“Beef stew, salad, and homemade biscuits with butter and honey. I put the kettle on for tea and there are sodas and bottled water in the fridge.”

“I’ve decanted the wine. It should go nice with the stew.”

She graced him with another of her smiles. “We can eat here at the table or over by the fire whichever you prefer.”

He nodded toward the low table and pillows in front of the fireplace. “Why don’t you take the food over? I’ll pour us some wine and be right behind you.”

They enjoyed their meal in a companionable silence. Like Aileen, the stew was complex with many layers of flavor. The simple salad was all business and the biscuits and honey a sweet ending. The meal, like the woman who’d made it, stirred his senses and begged to be tasted over and over again.

He set his dishes aside and pushed the table a few feet to the left. Relaxing back against the pillows, he pressed the wine glass to his lips and turned his attention to the sexy beauty sitting across from him.

The glow from the fireplace played off Aileen’s silken hair, turning the reddish blonde highlights to pure gold. He wanted nothing more than to wrap the gossamer strands around their naked bodies.

She took a sip of her wine and closed her eyes. When she darted her tongue out to catch an errant droplet on her lip he nearly lost the last increment of his composure. Not having her…all of her…was no longer an option.

Note: Kilty Pleasures will be on sale for half-price through the publisher link on release day, December 16th.

Like most authors, Nancy Fraser began writing at an early age, usually on the walls and with crayons or, heaven forbid, permanent markers. Her love of writing often made her the English teacher’s pet, which, of course, resulted in a whole lot of teasing. Still, it was worth it.

Published in multiple genres, Nancy currently writes for four publishers. She has published twenty-two books in both full-length and novella format. In November 2016 Nancy celebrated twenty years as a published author and will release her 25th book in mid-2017.

When not writing (which is almost never), Nancy splits her free time between her five grandchildren. She’s also an avid traveler with Las Vegas being her favorite destination. Nancy lives in Atlantic Canada where she enjoys the relaxed pace and colorful people.