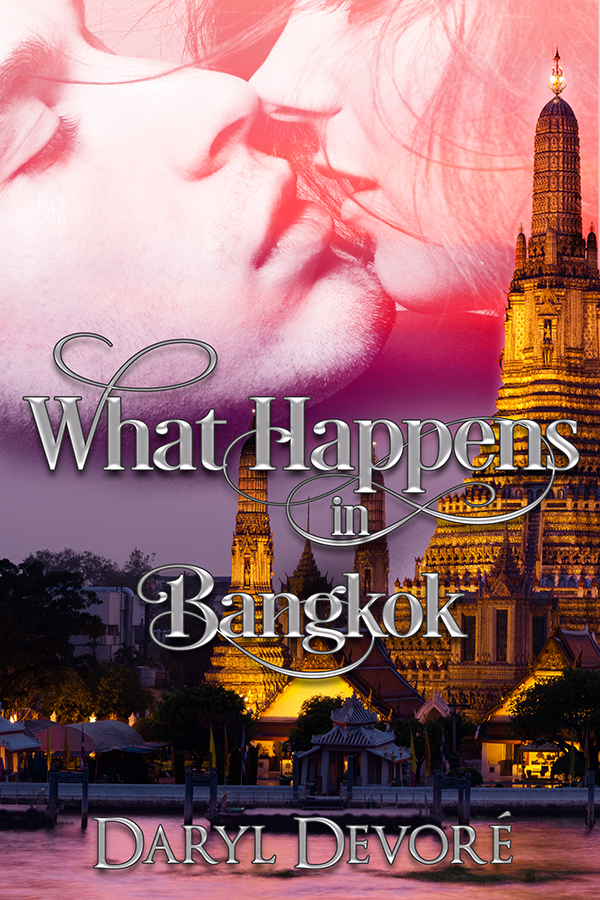 I sat down with Daryl Devore to talk about her book, What happens in Bangkok!

In grade 10, I wrote my first book. So, I would say I’ve wanted to write forever.

Meeting other authors and fans.

Who said I’ve overcome them?!?!? I am not good with edits.

I don’t outline. I’m a pantser. I just go for.  If I need to research, it’s done on the fly as the book is rolling along. With What Happens in Bangkok – I’ve never been there – I need to know some street names and the transit system name and what they call their money. I research as I write.

Find a critique group. Other eyes have to go on the chapter/book. It isn’t perfect. Even as a multi-published author, I send my books to my cps (critique partners) and betas before sending it to the publisher.

Have you made any writing or reading themed New Year’s Resolutions?

I don’t make New Years resolutions. If I make them, I have to stick with them. It’s hardwired into my personality. So I save myself a lot of stress and don’t make any.

I have a little corner all to myself, next to a wood stove to keep me warm on cold Canadian winter days. Generally, I’ll have a Diet Coke and sometimes chocolate. Ok, maybe more than sometimes. Ok, maybe I’m munching on some now as I write this.

I think Darien from my latest. The world sees the arrogant rock star, but I know the other side of him and he’d be fun to talk to.

I’ve been fighting it out for years – a medieval romance with a prince- a dragon and a woman with a secret. Talk about a book that doesn’t want to get written! I’ve written 4 other books and I still can’t get from chapter 2 to chapter 3. Never knew dragons were so difficult.

What Happens in Bangkok is Book 1 of the Two Hearts One Love Trilogy. Book 2 – Darien’s Desire is at the publisher. It’s gone through round one of edits and will get sent back to me soon for final edits. So, it’s publishing debut is not too far away.

Book 3 – Forever, is already written and is waiting for Book 2’s publication then I’ll send it in.

Daryl Devore lives in an in old farmhouse in Ontario, Canada, with her husband, a large salt water aquarium full of fish, a black cat named Licorice and some house ghosts. Her daughter is grown and has flown the nest. Daryl loves to take long walks up her quiet country road, or snow shoe across the back acres and in the summer, kayak along the St. Lawrence River. She has touched a moon rock, a mammoth and a meteorite. She’s been deep in the ocean in a submarine, flown high over Niagara Falls in a helicopter and used the ladies room in a royal palace. Life’s an adventure and Daryl’s having fun living it.

Tell us a little about your new release: What happens in Bangkok

Take an international rock star. Put him in a private club in Bangkok, Thailand. Have a rival triad attack the club. Everyone – except the rock star is killed – and now he’s running for his life.

Take a small drag queen club where a brother of the rock star performs nightly as Madonna. Said brother figures out the perfect disguise for his younger sibling.

To save Darien’s life his brother asks, “Can you walk in high heels?”

I was driving down to NC to visit my daughter and a song came on the radio. Next thing I knew, I had 3 chapters written on my laptop. Luckily, my hubby was driving at the time – lol.

Card carrying pantser. Winging it all the way.

They exploded onto my laptop.  The characters just happened.

Lol –  drag queens. I researched them and their lifestyle. One thing a queen has to do is tuck. A certain male anatomy part must be hidden so the lines of an evening gown aren’t disrupted. That was an hilarious video to watch.

I got stuck part way through writing this book and put it away. Then one day in yoga class the solution hit me. Write a sequel. Once I decided I could tell the whole story that way – What Happens in Bangkok flowed right to the end. I started on book 2 – and hit a wall and discovered there was a book 3. Book 4 tried to assert itself, but I got everything done in 3.

See – a total pantser – had no idea I was even going to write a trilogy.

Book 2 and 3 are written – so the trilogy is done. Book 2 has gone through first edits. Waiting on final edits from editor then it’s cover and galleys etc.  When it is close to publication, I’ll send book 3 to publisher. All 3 should be out this year.

“Or both.” She popped a salsa-covered chip into her mouth.

“Awesome.” Darien dipped a chip and bit into it, trying not to look like he couldn’t tear his gaze from her. The elegance of her moves as her fingers unfolded and reached for a chip. The curve of her wrist as she scooped some salsa. The jolt in his body when she opened her mouth and licked her lips. Watching the chip disappear past her teeth was too much for his control. His cock sprang to life. He’d never be able to look at chips and salsa the same way again.

The waitress placed the tray of monkey wings on the table. Erika squealed as they both reached for one. The happiness spread from her face to her body. Her nipples were visible, pressing against her dress. The pressure in his slacks increased. Her lips parted. He stifled a groan. She slid the piece of meat into her mouth and lightly bit into it. Her teeth grazed against the chicken meat, pulling it from the bone. A dribble of sauce escaped. She flicked her tongue across her bottom lip, closed her eyes and heaved a delighted sigh. Sweat ran down Darien’s back. Yes, the wings were spicy. But the vision across from him was twenty jalapenos hotter. She picked up another wing. Darien trembled, grabbed his drink and chugged half of it. It did nothing to cool his soaring temperature, or reduce the swelling in his pants.

The visual of her lips wrapped around the chicken wing morphed into her lips around his fully aroused cock. As she pulled the next wing from her mouth, he swallowed–hard. He wiped his brow. “This is hot.”

“Not too hot for you?” She placed her index finger in her mouth and slid it out, licking off the sauce.

Other books by Daryl Devoré

A Guy and A Girl – NA contemporary romance

Red Tulip – flash fiction with a hint of mystery