And check out the other great blogs on the hop!

Our backyard floods. Since we moved into this house, over fifteen years ago, the section to the right of the backdoor, just beyond the patio and before the bamboo, floods. Badly. If it weren’t for the water, you wouldn’t know that the backyard is actually a small valley between the two houses to each side, but there is water and so we do know. There’s a lot of water. In fact, after a torrential storm last night and into this morning, there’s a remarkable amount of water in the backyard right now. We call it Lake Turrell, for the name of the street, and it has been a fixture of my time living in this house.

With one afternoon standing out among all the rest.

I am ten years old. It is late June, maybe early July, but it’s already hot–muggy the way only summer in New Jersey can be, and everything is a little saturated, seen through a thick fog of humidity. The rain comes in sheets and buckets, but that is not unusual. It is summer in New Jersey and anything is possible.

Except this storm causes a problem. The drain sewers in the street are backing up and then they are shooting out, bubbling, gurgling fountains of rainwater gushing down from the sky and up from the ground.

This is the afternoon Lily and Seamus became some of our best friends. They had just moved from New York City, away from the recent 9/11 attacks and to the nice suburbs. We’d know there were kids our age, but we hadn’t met them. Until that afternoon.

That afternoon, the streets flooded for real and our slightly older, much cooler neighbor took his lake kayak out in the water, never scraping the ground–the road. That afternoon, Lily and Seamus and my younger brother and I stood in the great, flooding puddle of Lake Turrell, up to our pale knees in backyard water and dirt and grass, and we splashed and we swam and we got covered in muck. That afternoon, we formed a friendship in the shape of dirty handprints on each others arms, in the splash of water to the face, in the shared laughter of a day when you can’t help but to get wet, and instead you enjoy it. 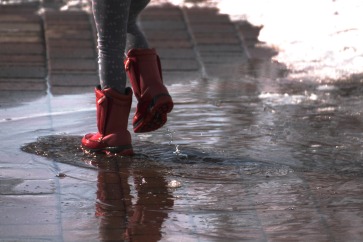 Lily and Seamus went to Catholic school, but we had grown close and stayed close. We shared books and double sleep overs, birthday parties and movie marathons. We grew up, but it wasn’t the kind of friendship that needed constant attention, and we never really grew apart.

The family moved to Canada the year Lily and I graduated high school, and then to Washington state, Maine and then back to Queens, not so far from where they started over a decade ago and much closer to Lake Turrell.

My parents talk of moving too, once my boyfriend and I can afford to live on our own, once my brother decides to move out, once they don’t need this aged, wonderful Victorian house for the two of them. Wherever we end up, all of us on our paths, and if I decide to have children one day, I hope that they too will go swimming with lifelong friends in a big muddy puddle in the backyard. It’s something unforgettable. ♦

One thought on “Summer Floodin’”