I sat down with Anya Sharpe to talk writing, heroes and her new book, Passion Unscripted!

I’ve always been a writer! Started adulting as a newspaper reporter/columnist and editor. When my daughter was a preschooler she’d wake up in the middle of the night and I’d make up stories about her two favorite stuffed animals (Puppet – yes, a puppet. Original, I know. And Freckles) to get her back to sleep. (Her favorite was when Freckles fell in a vat of pudding during a field trip to the pudding factory…but, I digress.) In the back of my mind I thought “Gee, I wish I had the talent/guts to write a book. Nah. That ain’t gonna happen.” Until one day when I actually started writing down one of the stories…and kept going.

Wow. So many. I met a bunch of great romance authors who live near me and we were all in a writing group together. Several of them are gang-buster Indies. Without them, I would have given up before finishing the first three chapters of the first book I attempted. I guess the highlight was getting my first contract from Wild Rose Press for Passion Unscripted.

My biggest challenge will always be self-doubt. Writing is SUCH an isolated endeavor. I really love the quiet and being alone, but then those big, hairy, ugly doubts sneak in and start telling you that you suck and no one’s gonna read your stuff. I overcome it with a little help from my friends and family. If they didn’t tell me what I was doing was good enough, I’d be burying the laptop in the back yard.

Research is a rabbit hole. Okay, I am a panster. If I had to outline a book I’d never complete anything. I’m also a huge procrastinator. Which is funny because I don’t seem to procrastinate on the actual writing. It’s all the other “book stuff” I’m finding I need to do that is painful. Anyhow, the most research I had to do was on the book I just completed, Nine Hours. It’s accidentally a paranormal romance. And it accidentally takes place in Norway. Yeah, so I had to research a bunch of Norway stuff. And translate some lines. But it was fun. And, now, I wanna go to Norway.

(See above, LOL) Yeah, researching eastern Norway was interesting. I’ve also had to research how to become a DEA agent for another book I’ve got started. Not sure any of this is “weird,” but it does all turn into a rabbit hole. I go to look up one thing and 45 minutes later I’m practically signing up for classes in it or buying an airplane there. (No, not really….)

Find a writing group with people in it who share your genre. They will lift you up and give you the push you need to keep going. If it’s a really good group (like mine was) they won’t be afraid to say (NICELY) what you’re lacking, doing wrong, doing right, etc.

My writing nook is my daughter’s former bedroom. I just recently painted one wall bright orange. Because orange is cool. I keep a container of M&Ms on the desk and allow myself about 6-10 a day only when I’m working. Usually I just have water to drink, but in those arctic Phoenix winters when it gets down to 50 degrees, I’ll have a cup of tea. Plain. Preferably green or Darjeeling. Or any black tea really. Just not Earl Grey. Bleah.

Well, just finished Nine Hours and hoping to find a home for that. Have three partially started projects. But I think I’m gonna go with what I’m calling the Casper Creek Series, which takes place on a Colorado ranch. I’m thinking three books on that?

Just to keep writing and hopefully get my books out there. A two-book series has been contracted by Wild Rose Press, so editing on the first one will start after Passion Unscripted releases, I’m told. That and going on a cruise in October. Because I love vacations.

Anya Sharpe is a former journalist and teacher who has been addicted to reading her whole life. Passion Unscripted is her first novel. When she isn’t writing or stuck with her nose in a book, she loves to travel— especially anywhere with a warm, sunny beach—scuba dive, ski, and try interesting restaurants. She’s a pretty good cook, too. Anya lives in Arizona with her husband, son and daughter, along with her side-kicks, The Dog and The Cat. 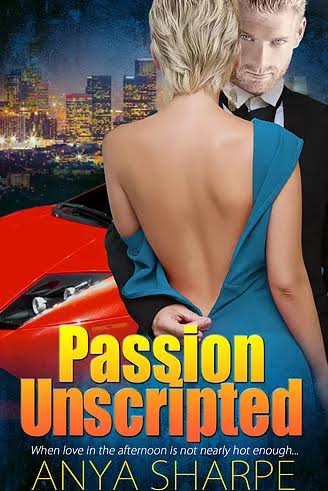 Passion Unscripted is about a playboy soap star who gets the hots for his co-star and decides to give up his bad-boy ways. But he’s got two woman in his past who make it difficult for him to get the girl he wants. And the heroine has some secrets of her own, too.

“Passion” is actually the second book. The hero, Carson, was a secondary character in the first book I wrote (which needs major rewriting, so it is collecting dust). The gals in my writing group loved him and begged me to write “Carson’s story.” So I did.

Outline? Hah! I’m too lazy and distracted to outline. Dove right in.

Carson is a bit of a comedian. He doesn’t take himself seriously, and others don’t always either. And, he was a big ladies’ man. But he is really kind-hearted and really, really, really in love with Lara. Oh, and his car too. He loves his Lamborghini. Lara is much more serious. She’s kinda snarky and has a hard shell she uses to hide her personal secrets. But she puts up with Carson’s nonsense.

Not a lot of research for this story. It takes place in LA, and I lived there for a while and often go there to visit friends and family, so I know the area pretty well. I did talk to a guy who works on the set of a TV show for a little background to make studio scenes (hopefully!) somewhat realistic.

Tomorrow! October 20, 2017! Yeah, it was supposed to be the second in the series, but the first one needs a lot of work. But it stands alone just fine.

Lara had been on his mind for the last twenty-four hours. He hadn’t been able to think of anything else other than this goddess. And here she was sprawled across his car like a sex kitten in a wet dream.

He halted directly in front of her. The scent of her delicate floral perfume invaded his senses. Everything about this woman seriously got to him.

Widening his stance so her legs slid between his, he placed his hand on either side of her on the hood, bringing him close enough that he could have pressed his lips against hers. Which he really, really wanted to do—but wasn’t going to. Yet. It was time to play, and Lara was clearly on board with that. She didn’t even flinch.   “Howdy, Cowboy.” She boldly met his gaze.

He didn’t respond for a beat or two, allowing the tension between them to build.

Did the woman make a habit of parking her very fine ass on cars? Whatever—that scorching hot body was made to sit on them.

“It appears you are sitting on my car.” He kept his intense gaze trained on her. Lara’s lip twitched almost imperceptibly.

“No one sits on the Lamborghini.”

“What’re you gonna do about it, Cowboy?” She cocked her head ever so slightly to the side, the hint of a smile playing on her pouty, perky lips. His dick twitched, but he didn’t respond for another few beats. Her lower lip trembled ever so slightly.

“There are a lot of options.”