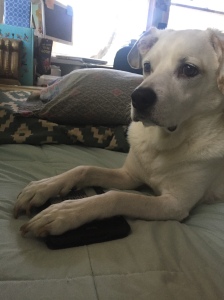 The greatest joke I ever told was when we got Houdini. He was six weeks old, a floppy white and brown mutt, the last in his litter to come up from the southern kill shelters, and unable to stand on his four, wobbly legs without going full spread starfish like Bambi on the ice.

It was April of eighth grade, and he was too little to leave alone in the house, so we brought him to my grandmother’s for Passover the day after picking him up from the rescue center. For twelve hours, the names had been flying, literary names, artist names, names for explorers, places, colors. In my family, naming a pet is a serious business.

It was one of my parents. To this day, I’m sure which one, but they became a united force, determined to name this very Irish hound dog looking mutt Moses.

Ready for the greatest joke?

So we named him Houdini, after another famous Jew who escaped.

Dini is eleven and a half, and with the exception of light cataracts, he’s in fighting shape, proof that mutts are the superior breed. (We’d been Bostons and bulldogs before him, and they suffered a long slew of ailments.) He’s a frisbee fanatic, and terrified of going up the stairs. His bark is worse than his bite, but he barks all the time. He’s such a staple of my family, that my mother bought me a full-sized, (larger than Dini) plush Dalmatian (it was as close as we were gonna get) when I left for college, so I wouldn’t miss him. He’s also head over paws, irrevocably in love with mom.

There are benefits of getting a puppy. One of the biggest is that Houdini doesn’t care about cats. Every once in awhile his survival gene will kick in and he’ll remember, oh hey, I’m a dog, I should chase that, and he’ll try for all of .5 seconds, before giving up. For the most part though, he leaves the cat alone.

And Vincent is the world’s greatest cat.

We got lucky with him. Our two-year-old kitty, Rocket, suffered a stroke a few years ago and had to be put down, which was devastating. Instead of adopting a kitten, because kittens never have trouble finding a home, mom brought back a one-year-old cat from the rescue center that was withdrawn and introverted. 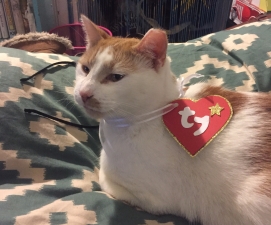 But slowly, surely, he came out of his shell– and his various hiding spots, and let us get close. And closer, and closer. Vinnie ended up being the most affectionate cat I have ever met. Once in his comfort zone, he became obsessed with people, spending his time on our desks, our beds, our tables.

He cuddles – have you ever heard of a cat that cuddles – never bites, kisses, snuggles and meows at closed bedroom doors to join the party. He is obsessed with my boyfriend – matching redheads, I think, and he will seek human attention through his day, when not snuggled in sunspots on the porch.

We named Vinnie for Vincent Van Gogh. He is a red and white cat, with a small piece of his ear missing. When we brought him to be fixed, we were told it’s the way vets catch-and-release wild animals that have been fixed, but by then, the name had stuck.

And that’s when we realized that we accidentally gave him my grandfather’s first name. Which means every time I add my last name to call him, I end  up calling my 94-year-old Italian grandfather. Whoopsies. Not as bad as mom, who said to grandpa’s face, “How are you, Vincenz?” 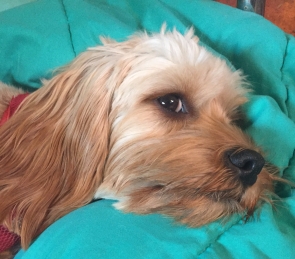 And now there is Penny. Penny is my grandma’s eight-month-old Cavapoo. She is floppy and adorable and wild and just the perfect addition to a house of animals that swells with so much love. We have had turtles, birds, fish, once a miniature shark, the list goes on.

The animals drive me crazy from time to time. They are loud, messy and troublesome. Vin has learned that my computer keeps me from petting him, and now stands in front of the screen when I am working. Penny chews and Dini barks. 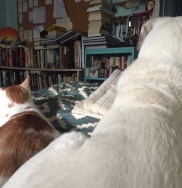 I couldn’t picture life without them. Animals love unconditionally. They are the smiling, happy face that we all need at the end of a very long day. They are the uncomplicated cuddle that can heal a broken heart, tears from a rejection letter or just a bad shift at work. My animals, they’re not just pets. They’re family.♦ 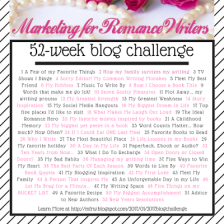