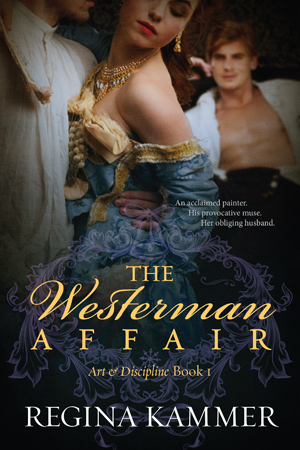 I got to sit down with Regina Kammer to talk writing, inspiration and her new book, The Westerman Affair!

I began writing stories in grade school (which was a really long time ago). I didn’t decide to take up the pen again—or laptop, rather—until late 2005 when I discovered an event called National Novel Writing Month. My first NaNoWriMo was 2006 and I have been participating every year since then.

I take notes as the muse strikes and keep them either in one Word document or in a notebook (handwritten notes get transferred to the Word doc eventually). So this document is not an outline, but rather random ideas and snippets.

I mull over a story for a while. Then, when I’m ready to write, I use that document as a rough guide and strike out the ideas and snippets as I incorporate them into the novel.

We moved a couple of years ago, and now I have my own office! My favorite writing snack is popcorn, and my favorite writing drink in the winter is hot chocolate. But I also enjoy cocktail hour writing time with bourbon.

I have a character—James—in an unfinished novel. He’s my dream date. I have to finish writing him though.

What project are you currently working on? What’s next for you?

Regina Kammer is a librarian, an art historian, and an award-nominated, best-selling, multi-published writer of erotica and historical erotic romance. Her short stories and novels make history sexier, whether the era is Roman, Byzantine, Viking, American Revolution, or Victorian. She’s even sexed up contemporary settings, Steampunk, and Greco-Roman mythology. She has been published by Cleis Press, Go Deeper Press, Ellora’s Cave, House of Erotica, Story Ink, Loose, Id, The Naughty Literati, and her own imprint, Viridium Press. She began writing historical fiction with romantic elements during National Novel Writing Month 2006, switching to erotica when all her characters suddenly demanded to have sex.

Keep up with Regina at: https://kammerotica.com/

Tell us a little about your new release: The Westerman Affair!

Charles Westerman, Victorian England’s most sought-after landscape painter, is finished with love affairs. Yet after a taste of forbidden passion at a private art exhibition, he knows he’s met his muse in Rosamund. Problem is she’s married. For the sake of his career, Charles simply cannot afford to be distracted by another disastrous entanglement, especially one with a married woman.

Rosamund and Jeremy’s marriage is curiously modern for stodgy Victorian society. Together, the couple try to entice Charles into an unusual arrangement. Will Charles risk the threat to his reputation to explore passions and proclivities he never knew existed—and discover desires he never knew he had?

A tale of spanking and polyamory in the Victorian art world.

From real life, believe it or not! Incidents in my own life are peppered throughout the book plus people I know and the relationships they have with each other. There was a lot of stuff happening in my life about ten years ago that I just channeled into this book.

Most of the main characters are based on people I know, but with lots of creative changes. For example, our hero Charles is based on a guy I know. He’s an artist (not a painter). He doesn’t have a sister, so the sister in the book, Francesca, is based on one of his really good friends from childhood. There’s more, but I won’t go into it in case he recognizes himself!

I do know several polyamorous couples, and while they are not depicted in the story, how they manage their relationship was used as the basis for how Rosamund and Jeremy negotiate their marriage.

The Westerman Affair was my 2014 National Novel Writing Month novel. As I am basically a pantser, I dove right in. But, as I explained, a lot of the characters, events, and relationships are based on real life, so it pretty much just flowed out of my fingers.

Did you do any cool or interesting research for this story?

I had to do a ton of research on the Royal Academy of Arts Summer Exhibitions during the 19th century. Luckily for me, lots of the old exhibition catalogs are available either on the Royal Academy website or on Google Books. My Masters in Art History was also valuable for this book!

What’s next for this story – is it part of a series?

THE SUSURRATION OF silk induced Charles to look up from leafing through Creslow’s landscape architecture plans. He couldn’t believe his luck. The woman dressed in robin’s-egg blue and chocolate brown had just walked into the library. She glanced around, then moved to the bookshelves, drawing a finger along the spines, alternately nodding or shaking her head with a wry smile. She walked down the row until she was right next to him, the flounce at her rear eye-level from his position bent over the drawer. He straightened, the action drawing her attention.

She smiled, the expression slowly transforming from a superficial mask to startlement curling her luscious lips and brightening her light-brown eyes. She held out her hand, exuding a natural sensuality that mesmerized Charles until the need to breathe forced him to respond.

He took her hand in his, the warmth from the touch shooting straight to his crotch. He bent his head and hovered, wanting desperately to touch his lips to the tips of her delicate fingers bejeweled with gemstone rings but naked at the end of her sheer lace half gloves.

He released her, too soon really, as she too seemed to want to linger. “Madam, I see you’ve discovered Lord Creslow’s library.”

“As have you, my good sir,” she responded casually. She glanced down at the drawer he had just closed, level with his burgeoning erection. “And might I find you in those drawers, or”—she waved her hand at the bookcases—“on these shelves?”

She was good. She’d guessed him for an artist. He chuckled quietly. “Ah, no, I fear not.”

“But really you should exhibit. For your career.”

Charles returned her gaze. The fine lines on her face revealed she was older, perhaps almost his age. She was an exotic beauty, with a subdued flirtatiousness that was enchantingly attractive. The smoldering spark of lust ignited. “I’m grateful for your concern. But you needn’t worry. I’ll be showing at the Summer Exhibition.”

And that was just a drop in the bucket. He was riding a wave of professional notice. Some Grand Prize winners eventually fell into utter obscurity. However, he had works spread throughout Europe—

He cringed. Peacocking his own accomplishments would get him nowhere with this woman. She was far more sophisticated than his usual fare.

She turned, a move so graceful and sensual he simply stared. “And what will you be showing?”

There was that sly smile again, tinged with cool awareness of his physical state. “At the Summer Exhibition.”

“Landscapes?” she said with a modicum of surprise. “In oil?”

“How colorful.” Her gaze took him in from head to toe, lingering about halfway. “And do you employ an assistant?”

“To mix your pigments? Stretch your canvases? Clean your brushes?” Her voice deepened ever so slightly. “Really, there is so much an assistant can do for you.” Her intonation was positively seductive.

She was teasing him. Lusciously teasing him. He leaned in a hair’s breadth. “Madam, let me explain something.” He kept his tone low with just a hint of sultriness. “When a client commissions my services, he expects me to do the work. I am an artist, not a manufacturer.”

She blushed to the roots of her golden-brown hair, the coloring provocative, not demure. “Of course, sir. I did not mean to insult.”

“No insult has been taken.”

The crack of a snort drew their attention away. A balding man with his hands on his copious belly had made use of a leather club chair and footstool as a bed. His overly loud yet peace-inspiring presence had emptied the library and seemed to keep newcomers at bay.

Charles was virtually alone with his newfound object of desire.

Should they introduce themselves? That was what one did at these sorts of events, wasn’t it? She could be the daughter of a famous art collector, or the wife—

Yes, of course. She could be a wife. In that case, if she asked his name, he would offer. But he would follow her lead in the matter.

One should never seduce a wife unless one were absolutely certain she wanted to be seduced. Wives who wanted seduction were often married to men who wanted their wives to be seduced. It made for a happier marriage all around. One did not need to know details such as names.

Well, that was all well and good in theory. He’d never actually been with a married woman. The closest he’d ever gotten was with Annalee during her engagement.

His temptress sauntered away from the bookcase. “And what brings you to Viscount Creslow’s inaugural exhibition?”

He watched but did not follow her. “I have friends here, both on the walls and in the galleries.”

She glanced back, that smile playing upon her lips again, teasing, inviting. “How droll you are.”

He chortled. “Dare I ask you the same question?”

“You mean, am I a denizen of the art world, or merely a flatterer looking to advance my circumstances?”

“Those embedded in the art world are always looking for opportunities to advance their cause.”

Charles shook his head in disgust. “You don’t want to know.”

She tilted her chin and pursed her lips as she studied him, providing him the opportunity to study back. Her bone structure gave her face angles and planes that would make her a marvelous model for one inclined to portraiture. She held herself gracefully, as if posing for a full-length figural painting, seemingly knowing exactly which assets a man might find most appealing. Her body could easily tempt him away from dispassionate landscapes in more ways than one.

She couldn’t possibly be a model, though. Her accent and knowledge implied a cultured, educated, aristocratic background.

She held out her left hand. “Maybe I do.”

Desire smoldered in his groin. Before him was an invitation from which he did not want to—no, could not extract himself. Her magnetic draw was too powerful, and he too willing to be pulled right in. Perhaps he was too suggestible, his need for female companionship too easily quashing his reason.

And yet, his reason weighed in, there was something about her that was different from all the others. She understood his mind as well as his body.