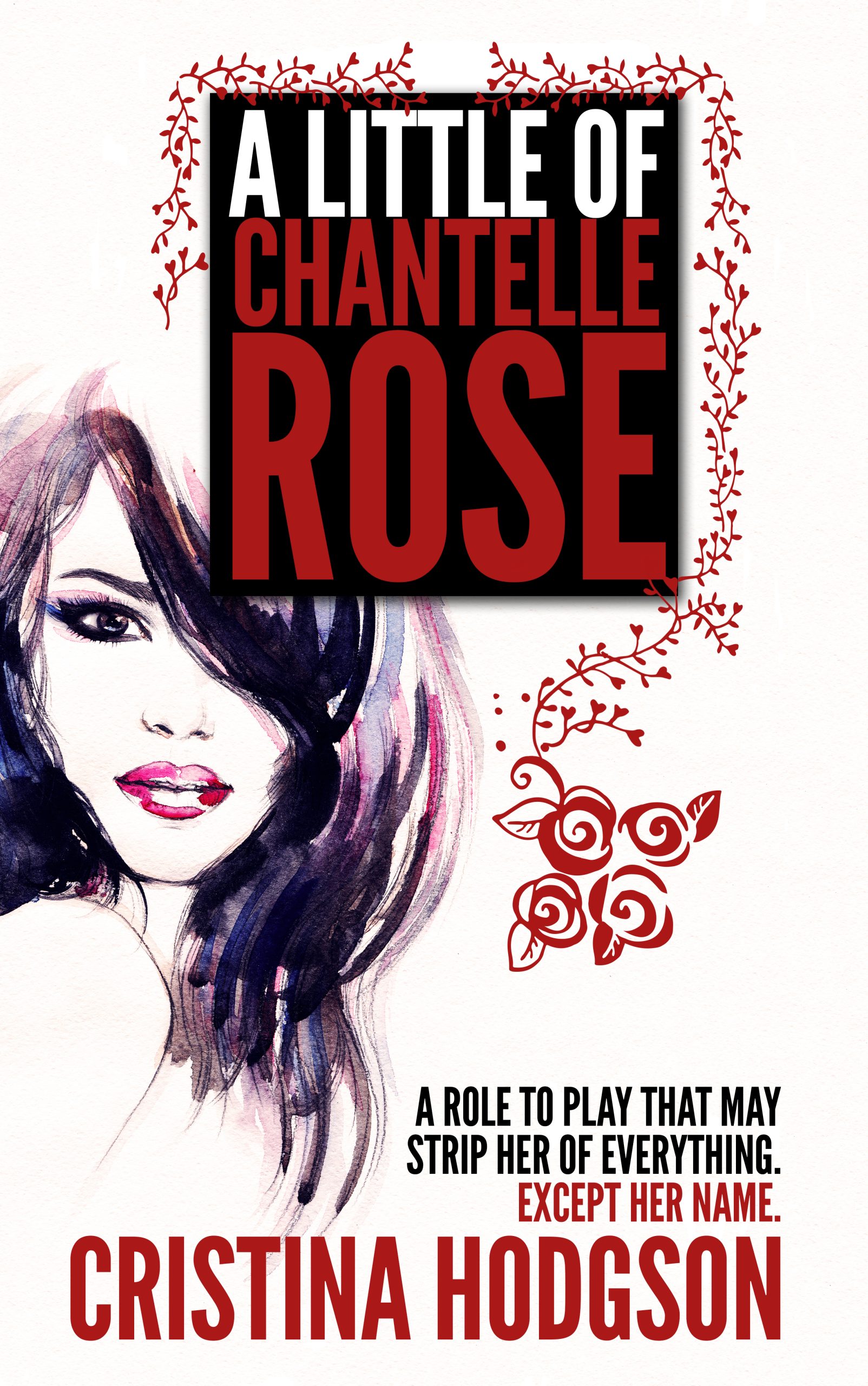 I got to sit down with Cristina Hodgson to chat writing, inspiration and her book, A Little of Chantelle Rose!

I’ve always been an avid reader, so I guess it was just a natural move, at least in my case, to put pen to paper and attempt a story of my own. From the reader the writer was born, so to speak. I wrote my first novel in my early twenties, but it’s only now, many years on, that I’ve started to publish work and take my writing a bit more seriously.

The most amazing experience for me, so far, was when I first held a printed version of my book in my hands. It was an incredible feeling, I didn’t know whether to laugh or cry from the emotion. I believe I did both.

My main challenge was finding a publisher. I needed someone else, outside my family, to give me a vote of confidence in my work. For me, this was finding a publisher, someone who was willing to spend time and money on my creation. After years of searching and many rejections, I got a contract with a wonderful small publishing house. Ironically, despite having a wonderful relationship with them, my second book will be self-published.

My work up until now has been totally improvised. I begin with a vague idea which then propels me off to a journey into the unknown. Which, if you think about it, has to be a plus, because if even I don’t know the ending to my novel until the last few chapters, I should be able to keep my readers guessing too!

That said, I would like to try and plot a little more, and have flow charts keeping things all neatly under control, so I don’t lose track of my secondary characters’ names or what they look like. But, to be honest, at the moment my characters just run a bit wild. I think this could be because in my real life I’m a bit over-organized. So when I sit down at the keyboard, it’s like someone else takes over and pays no attention to order or routine. And quite right too. Sometimes it’s good to just go with your inner feelings and not think too much.

Some trivia that I did discover, whilst researching for my latest novel, is that the oldest oak tree in the UK is 1048 years old! And still going strong, even if it’s a little stout around the middle. Not that my next release is about gardening or anything, but it’s an interesting bit of information even if you haven’t got green fingers.

Believe in yourself and don’t give up. Keep your eyes on your own work, what I mean is don’t start comparing yourself to fellow authors, just concentrate on your work and improving your writing skill. Try and build a fan base via social networking, easier said than done, mind!

Rafael, I don’t want to give anything away as this is a character in book two of the Chantelle Rose series which will be released shortly. But I think that more than one of my readers will agree that he’s totally dreamy. I guess you’ll just have to read the novel to find out why. ; )

Book III in the Chantelle Rose series. Each book can be read as a stand-alone, but all are connected through the protagonist Chantelle Rose.

I’m thinking of making my books audible and I’m actually thinking of narrating them myself. A challenge without a doubt, but a challenge I look forward to.

Cristina Hodgson, mother of two, born in Wimbledon, London, currently lives in southern Spain. Cristina had a long career in sport, reaching national and international level and still actively participates in Triathlon races and enjoys outdoor activities. In her spare time, she also enjoys reading and writing. She won a sports scholarship to Boston College. After a period in Boston, she returned to the UK and graduated from Loughborough University with a degree in Sports Science.

A LITTLE OF CHANTELLE ROSE is her debut novel. Amazingly, it has nothing to do with running!

You can buy the book HERE or email her at hello@cristinahodgson.com

Tell us a little about your new release: My new release, which I hope to have ready for April is the second in the Chantelle Rose series. Here’s the blurb:

Chantelle Rose is back. She has lived a fairytale. But will she ever get her Happy Ever After?

To find true happiness she must discover who Robbie and Lional really are. Their past holds the key to her future..

Chantelle, in her quest to find the truth, follows a trail that takes her to the depths of the pampas lands of Argentina.

There, the beautiful Valentina awaits –  and holds the key.

But who is Valentina? What is the mystery surrounding her?

And why is she so important to both Robbie and Lional?

Will Chantelle discover the truth? And, more importantly, will she discover her destiny and the fidelity in her own heart?

All these books are based around the main character Chantelle Rose, my inspiration for this character came after graduating from Loughborough University with a degree in PE and Sports Science, I traveled and worked in various jobs. One of which was as an extra in a British produced gangster film which was filmed in Nerja, Spain. It goes without saying that my sport mechanics and kinetic energy knowledge wasn’t put to maximum potential in this part-time job. But it was certainly a fun and unique experience, but most importantly it gave me an idea.

A year later I sat down and within three months Chantelle Rose was born.

This is an excerpt from A Little of Chantelle Rose

Just as I reprimanded myself for being so spiteful, her long legs that positively went on forever appeared as she descended the stairs.

“You have a really cute house,” she cooed as soon as she saw me. That left me momentarily stunned. I’d just about learned to deal with her cattiness, so her unexpected courtesy threw me somewhat.

In all truth, I thought we made quite a convincing Tom and Jerry team – me being Jerry, of course. This new Tom in her, consequently, left me wary as hell.

Vivien pulled up a chair by the kitchen table and sat down directly opposite me. For a moment we just stared at each other in awkward silence. Accustomed as we were to out-and-out slanging matches, getting a civilized conversation going was quite a challenge. I sat silent, thinking that I’d let her start the ball rolling, and depending on what she said I would decide whether to throttle her or not.

What I didn’t expect was for her to turn her baby-blue eyes on me. I noticed they were brimming with unshed tears, and though she attempted to keep them at bay, it was with little success. Her chin started wobbling and her cheeks glowed from rosy pink to deep crimson. Soon the wobbling of her chin spread and her shoulders commenced to tremble.

I sat there petrified. She was obviously on the verge of some sort of spasm attack. I hadn’t a clue where she kept her medication, or if she had any to start with. A Valium would come in handy. I couldn’t dial 999 either, as my mobile battery, which had a lifespan of three hours or less, needed to be charged. My charger was in the van, and the van had been taken by Tammy to load with kitchen devices.

My mind was in a whirl, and now I was getting as jumpy and apprehensive as she was. If I didn’t soothe myself pronto, I would be in grave danger of going to pieces. And Vivien, in her disarray, was going to be no help to me.

I took a deep breath to try and control myself as I continued to witness Vivien’s chronic decline. Her bright crimson cheeks had started to go blotchy and her whole body had started to judder. She’d closed her eyes momentarily. I don’t want to be bitchy, but she looked truly bloodcurdling like she was possessed or something. She looked like the girl out of The Exorcist – the original version – the one I’ve always had nightmares about.

So there was Vivien, my living nightmare, and I waited in hushed trepidation for her head to turn through 360º.

Vivien suddenly opened her eyes, and it was like opening a sluice gate. Tears just flooded out in non-stop waves. She was leaning against the table and even this started to vibrate alongside her quivering body. I didn’t know what to say to attempt to lessen her anguish. I’m always so tongue-tied in these circumstances. Eventually, in desperation, I blundered ahead and said, rather ineptly, “Is there anything wrong?”

At the rate she was going, she would surpass the previous day’s rain! On hearing my words Vivien started to shake her head vigorously from side to side.

Is that a NO? I was puzzled because I would have said that there was something very seriously wrong.