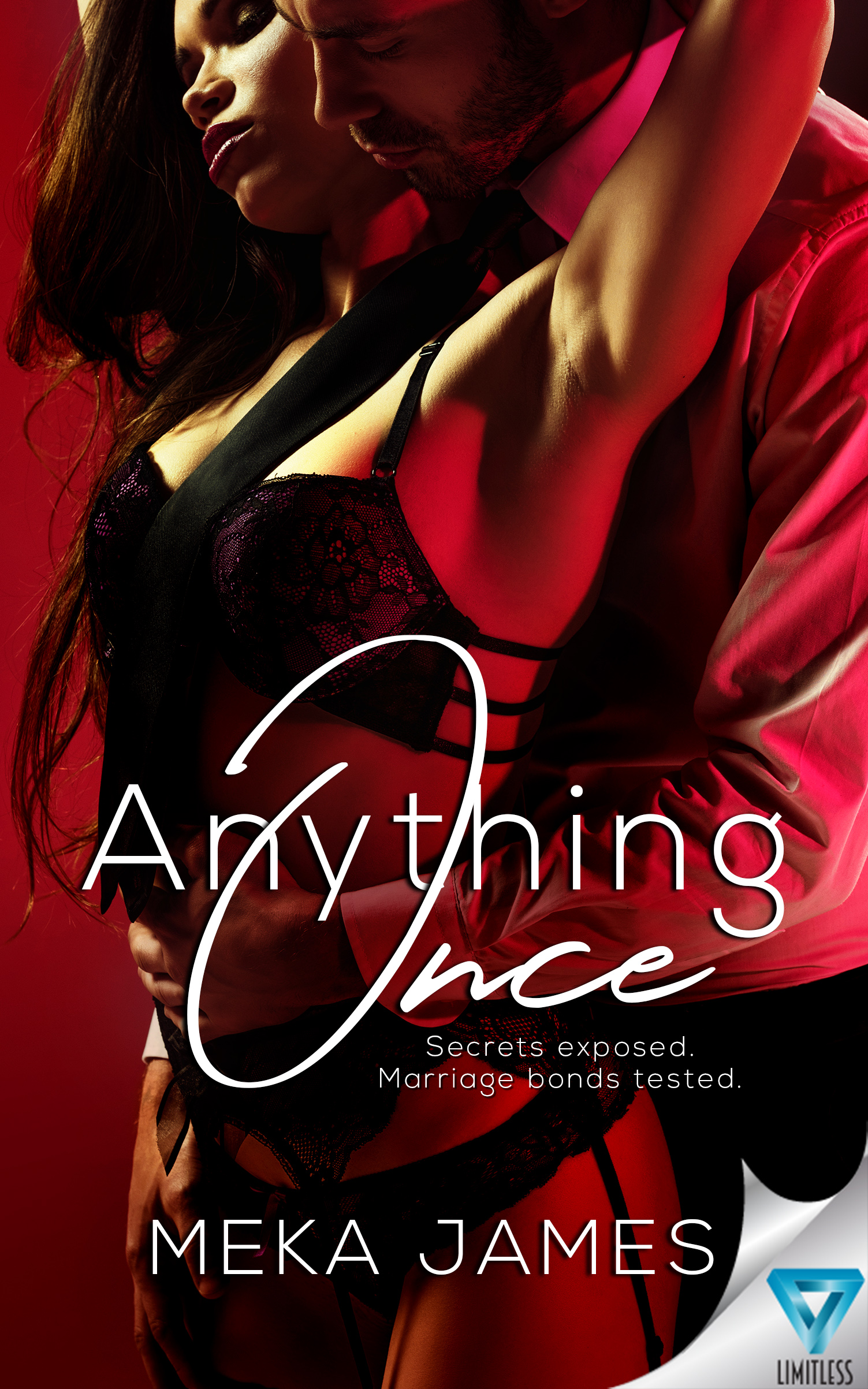 Meka is the perfect example of how Twitter friends can become real-life friends! I got the chance to chat with her about the romance and intimacy between married couples, a colorful Google history and her new release, Anything Once!

Oddly enough I don’t think I really had an ‘ah-ha’ moment. I sorta fell into writing. I started with blog stories because of a game I play (The Sims 3) and one of my readers strongly suggested I try and take that story and make it a book. That was the start for me.

Getting my first ‘fan’ mail from a reader. I don’t think my stories are life-changing, but when I got that first message that talked about the impact my words made on them. That was the best feeling ever.

Finding my squad. Self-doubt can be a real bitch and when you can’t find people you connect with only adds to that. I’ve had some major struggles with finding writing partners and beta readers. For a while, I floundered trying to find a place where I connected with others. I’d sorta resigned myself to being a lone wolf when I got an invite to a group. I was a bit skeptical considering my history but gave it a try and it’s been the best thing. My RChat squad is amazing and my outlook and skills have improved because of them.

I don’t plan. I don’t outline. I’m a pantser and proud! My books are all set in a contemporary setting because research is not my strong suit. Google and my squad are my go-to for things should I need help. But for the most part, I get an idea, the characters start to form and the story follows suit.

LOL…um…well, I don’t know how cool or interesting it is, for my first book I did have to up my game on things a serial killer might need to know. I’ll just leave it at that. Hahaha, I did learn you can buy almost anything on Amazon. That was a real eye-opener.

For my novella, researching sex toys was fun. There’s a lot out there, some rather intriguing devices.

Everything doesn’t work for everyone. Yes, read, learn, study, but just know that what may have been a ‘goldmine’ for one writer may not be your cup of tea. And that’s okay. Writers aren’t a hive and just because many talk about the wonders of a particular thing, don’t feel like you’re a ‘failure’ if that thing doesn’t work out the same for you.

I write on a laptop. It’s a beast of a machine (gaming laptop) that I’ve named Rocco. Yes, he has a name. We spend a lot of time together, it was only fitting. I’m a tea drinker, have a cup every morning.

OMG, how am I supposed to choose? I love my male leads. Each one is caring, loyal, and a freaking beast in bed. I’m not picking one, we would simply have to live in a very happy polygamy relationship. Well minus Seth, for reasons…

A few. My priority one is a f/f romance novella. After that, I have two ‘cougar’ May/December novels that are in various early stages.

After my January release, I have a second one due out in March, Being Neighborly.

Find her on her

Tell us a little about your new release: Anything Once

From there they embark on a new journey of sexual exploration. Trying new things, new places, and grow closer during the process. It’s also a look into how people grow complacent in long term relationships. How what is not said or hidden can be ignored tensions bubbling under the surface.

Dove right it. Once I got a general idea, I started writing it out and let the characters take shape.

It started with Quinn and initially, it kicked off after the ‘big moment’ with her drowning in the worries and stresses due to the rift between them. Once I established the tone and foundation for their relationship, it all built up from there.

Working with a married couple. Let’s face it, 98% of romance (not hard stats, just a number pulled out of the air) is with new couples. Folks are all about the cute meet (yes I know it’s the other way around but that irks the hell out of me so I won’t write it that way) and watching the relationship grow and blossom. But what about ‘after the happily ever after’ the ‘where are they now’? I loved showing that even couples that are in long term relationships can and do still have hot sex. They still have a story to tell, a romance to fall in love with. Showing a couple on the other side of that really made me happy.

Balancing the light-hearted sexy aspects with the more hard-hitting serious ones. As stated before communication and complacency play a factor in this story. I also tackle the subject of infertility. My characters aren’t perfect. They have flaws and how they handle things, what they do or don’t share with each other is part of that flaw. I struggled with this story for that reason. Love them or hate them, my characters are *human* and humans are known to make bad decisions. Selfish decisions. Showing their good with their bad, balancing the serious with the love and sexy times, this was the first story I’ve ever fallen out of love with during the process of putting it together. A real love/hate relationship for sure.

Anything Once is a standalone that will be out on January 22, 2019, through Limitless Publishing.

Quinn walked into the low-lit kitchen of her suburban home, sat her purse and keys on the small side counter, and leaned against it to slip off her ballet flats. Her bare feet touched the cool hardwood floors. She flipped off the light and pulled her hair free from its ponytail as she walked toward the staircase. After a fun dinner with her girlfriends, Quinn was ready to curl up beside her husband and sleep off all the food she’d consumed.

Her steps faltered as she neared the foyer. Moans and soft grunts. Ian wasn’t alone. The distinct sounds of sex poured from her husband’s office. A hard lump formed in her throat. All moisture drained from her mouth as she stood frozen. A soft glow illuminated from the crack of his office door.

With heart pounding against her ribs, Quinn placed one foot in front of the other, slowly closing in on the room.

Quinn covered her mouth to keep from crying out. Tears burned in the back of her eyes.

“You like this don’t ’cha, you nasty little slut.”

She frowned; that wasn’t Ian’s voice. Her hand shook as she raised it to the dark wood door. With light pressure, she pushed against it, increasing the opening. Her heart thudded in her chest, a painful ache accompanied each beat.

The glow from Ian’s laptop, the only light in the room, highlighted his face. Eyes closed, head resting back against his chair, mouth open, and though the desk hid his hand, it didn’t hide the movement. He was—she blinked rapidly, trying to process the sight before her. More vulgar talk mixed with grunts and groans sounded from the computer mixed with slapping flesh.

“Ian?” Forcing his name past her lips released the breath she’d been holding, and like an anaconda, allowed the ache to squeeze her heart a little tighter.

He bolted up, his blue eyes wide as they stared at her. They darted to the computer in front of him and back again. All words escaped her.

The sounds. The sex. Her gaze went to the silver back of his laptop. The cries of pleasure that weren’t drowned out by the loud roaring in her ears.

Closing her eyes, she took a breath. When she opened them again, Ian hadn’t moved. He opened his mouth to speak, but closed it again. Those blue eyes looked at her, a mix of guilt and shame. He reached up and lowered the lid of his computer, bathing them in silence.

She pressed her lips together and diverted her gaze. Her hot hand closed around the cool bronze knob and shut the door with a quiet click.

Or join the Limitless Readers FB group. Meka will be co-hosting a takeover that day. They can interact and enter for a chance to win a fun swag basket that includes a copy of Anything Once as well as Meant To Be Kept (her co-host’s book)**