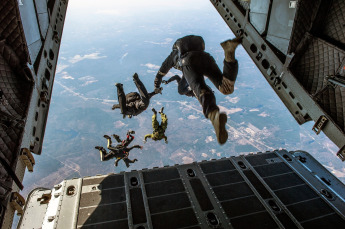 I want to be badass. In theory, that’s simple enough – a movie montage does the trick for learning martial arts, surfing or whitewater rafting. A couple clues, details and notes in between chapters one and three and you’ve got a bonafide Alps hiker or hot pepper taster.

The truth is, my imagination is often bigger than my gut. I’d like to think that if I ever got dropped into a situation, I’d take a deep breath and agree to some really cool things, but there’s a lot I know I’ll never get the opportunity to do.

And a lot I plan to do anyway.

I don’t talk about my anxiety much. It’s not a super fun topic when it’s going on and it’s an even less fun topic to chat about when it’s not, but I really like the idea of beating it by doing the things that scare me the most. If I can jump out of a plane, then that nagging little voice in the back of my head might just give up the ghost and stop trying to convince me that my head cold is some rare and fatal disease. Ya know, fun things like that.

But that delightful topic as a segue into my bucket list, here are a few things that I can’t wait to do!

Camp Under the Northern Lights

I mean, this one is pretty self-explanatory. Have you seen them? I love the idea of really connecting with nature – a totally insane and wild form of nature – and camping under the greatest stars the universe has to offer. I mean, short of becoming an astronaut (which I can’t do because, among other reasons, I have terrible eyesight) it’s the closest you’ll ever get to going to space.

Yeah, it was coming. I mean, come on, if you can jump out of plane what can’t you do, right?

One of the most common indicators that I’m experiencing anxiety is actually water. It tends to come in dreams, where I see the water’s surface above me but I can’t reach it. I love the idea of being able to both pay my respects to the most powerful force on earth and also to beat my fears about it. All in like the prettiest place ever.

I don’t mean like a hill. I mean like, I dunno, someplace in The Alps, someplace you plan to hike for weeks, a place you train to hike. The idea of man vs nature (or I am Woman, hear me roar vs. nature) I don’t know if you’re picking up on this, but I’m all over that.

Support Myself With My Art

Whoo hoo, major change of tone here. But the greatest thing in the world to me would be supporting myself, my boyfriend, any family I have, by doing the one thing I love doing more than jumping out of planes or camping under the stars – writing. This one will be harder than climbing Everest, than swimming with the Australian monsters of the deep. But at the end of the day, at the end of what I hope will be a long and fulfilling life, it will be the most worth it. ♦