An MFRW Author Post (Kinda) — And check out the other blogs on the hop!

Feminism is nuanced. Not only does it change from day to day, but there are a thousand different angles from which to analyze the impact of media, politics, and science on the relationship – and subsequent privilege and oppression – between the sexes.

Sometimes they are large conversations – sexual assault, the wage gap, access to our own bodies, and sometimes they are small conversations – media portrayals of the ‘perfect female form,’ the impact of a stay-at-home dad in a Cheerios commercial, the micro-elements that add up over time to to create either a better or worser world for women, and subsequently men, who suffer at the same hand of gender inequality and expected norms.

Today, I want to discuss one of those smaller conversations. I often speak about the wage gap, fists in the air feminist issues, so let’s think a little smaller now and discuss an issue that, though subtle, though nuanced, is just as feminist and just as important.

The way I see it, romance novels have an extra burden to be feminist. Is that fair? Maybe not. But right now the rest of the publishing and media world need to focus on getting their shit together where female protagonists and healthy relationships are concerned, and I’d much rather that they did that first. Romance has that whole women-are-people thing figured out, and must now carry the mantle for the other elements of feminism that most mainstream media won’t even touch. 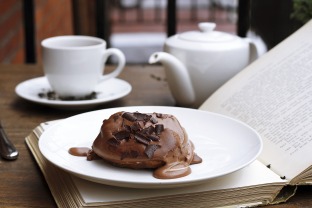 And one of those things circles around food. Shocker, right? Women and food have always been deeply entangled, since the dawn of the hunter and gatherer to the 1950s housewife cooking in her pearls, to the ubiquitous conversations about fat-skinny-healthy-none of your business – perpetuated by mass media and advertising. It’s a multi-faceted issue, and at the end of the day comes down to a much larger topic – women’s autonomy over their own bodies and the right to look and eat a certain way.

And yet, despite the deeply feminist roots of women and food, many romance novels still appeal to the stereotypical oversimplification that women should be ashamed to like to eat. There are numerous references to “secret stashes,” “chocolate addictions” and “I know I shouldn’t, buts” that undermine the idea that eating is perfectly normal, safe and healthy as long as you apply self-control and otherwise take care of your body.

Why does this matter? After all, it’s a fairly innocuous detail in an otherwise progressive genre. And yes, it is. But it’s also very important. Women have been fighting for autonomy over their bodies for years – from the right to choose to the right to walk down a street at night without being harassed, or worse.

From the media to politicians to the inane catcallers, we are told time and again that our bodies do not belong to us, and that we must exercise and eat and dress a certain way to fit the standard of beauty that the rest of the world is looking for. Even the simplest mention of a “secret stash” or the idea that a heroine is guiltily eating ice cream late at night, feeds into that narrative, that we should feel bad for eating ice cream or pizza, that we shouldn’t enjoy simple treats, that candy bars or cookies are in some way forbidden.

Now, I understand that women think like this. As a woman who grew up in the age of the Internet, I’ll all too aware of the ubiquity of dangerous, deceitful images, that show the photoshopped versions of real women. I get that. But I also hate feeling guilty for eating too much, and it’s something I work hard to prevent myself from thinking. Sure, I could probably orient my diet to be healthier, but I eat home cooked meals for dinner nearly every night and include a healthy amount of fruits and veggies in that diet. So what if I want to binge Stranger Things with my boyfriend and share a bag of M&Ms? I’ll go for a walk tomorrow and that will be that. That doesn’t always stop me from feelings of guilt, but those thoughts are not my own and I am working to move past them.

The point is, we are so inundated with the ideal body, the perfect woman wearing the perfect clothes, that we often forget where these images originate. They are not yours and they are not mine. Biology does not dictate that thin is better – and make no mistake, body-shaming is body-shaming regardless of whether you speak of women considered too heavy or not heavy enough. The “ideal” female body type has changed a million times over history, and it will continue to change again and again.

It’s not always easy to march in the streets or to soapbox shout your feminist agenda. Some days, the issues of abortion, civil rights, fair wages and the rest simply seem too big to take on. That’s okay, self-care is fundamental to any fight. But this tiny detail, the idea of showing a female character who is at peace with her eating habits, of not pandering to the lowest common stereotype of sisterhood, that is easy. We deserve heroines who eat what they want to don’t want – as long as they are healthy – and don’t feel guilty about. We need to change the narrative that there is anything shameful or dirty about eating a candy bar.

Yes, it seems simple. But a thousand tiny details can make a mountain high enough to climb. Give your heroines a chance to break away from the rules that govern us each and every day. Let them eat chocolate without guilt. It’s one sweet way to make a hell of a difference. ♥