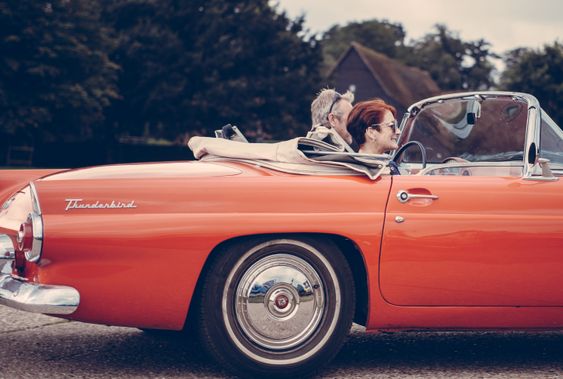 Alright, I’m sorry I made that terrible title a thing. I love puns more than is advisable. This atrocity is in reference to my characters’ relationships with the cars they drive, or would drive, had they been invented yet.

I’m a dyed in the wool classic car enthusiast. By day, I work as an automotive journalist for my automotive startup company. We have been a car family long before I arrived, and I happily plan to pass that legacy on. There are many reasons to love cars, and I won’t go into all of them right now, but I see cars as witnesses to history, as the markers of political, social, economic and creative moments. They mark the changing of decades, ideology and consumer behavior. There is much we can learn about the way the world worked by looking at the cars of the past eras and who owned them.

The same can be said of characters. I have been in and around the business long enough to become familiar with the certain types that own the certain cars. (And the ones they wished they owned – often an equally, if not more telling detail.) Classic car owners run the gamut, from foreign sport car experts to the Volkswagen bug collector.

There are drivers and owners by country of origin, performance, style, or brand. Often, what a person values most – design, model, horsepower, papers, is a very noteworthy detail of their personality that they might not even realized they shared. As a fiction writer, working to develop fully rounded characters with quirks and personality traits that may never actually make it to the page, I find the question of what their favorite car might be, just as important as their favorite movie, book or sport. Perhaps more.

Because, as a car enthusiast, I see cars as extensions of who we are. There is something so fitting about an ex-Navy SEAL driving around in a big, black pickup truck. That fits the picture.

But if the big, hulking military man is caught in a Prius, it tells a different story, opens a different chapter into that character’s life – why does he care about the environment? Is the car even his? Did he buy it because of the gas mileage or the green impact? If I changed the SEAL’s car to a vintage Camaro, say a 1969 (cough, the car I want to own, cough)… that opens an entirely new set of questions. Can he work on the car himself? Who taught him? Did he bond with his father over countless hours in the garage?

Peeking, even just a little, into the garages of the characters I’m writing gives me an incredible amount of insight, as well as combining two of my passions. We don’t always analyze or understand why we pick and own the cars we do, but they matter nonetheless.

For instance, if a heroine is driving a Camry, we can make assumptions about her lifestyle – she’s stable, safe, practical. Or, she’s broke, depending on how old the car is. If a heroine is driving to her practical, upscale, professional job as a lawyer, but she’s doing it in a GTO, there’s a story there, a contrasting that might give the character more color.

The cars I’ve owned and driven in the past didn’t necessarily represent me, but when working with fiction I have a little more leeway. Would my CEO be a BMW driver, God I hope not – Businessmen who drive BMWs, on the whole, tend to walk with their noses in the air to better deal with the stick up their butts. Crude, but you’ve met a guy or two who does that. It’s almost like a whole other species. But say he drives a modern Alfa Romeo, right. It’s still European, still a little posh and upscale, definitely still powerful. But this CEO is attracted to the curve of the car, to the way the design gives the car a sensation of perpetual motion, even when it is parked. What makes a man value the styling of an expensive purchase, over the panache of another name brand?

Coming from different backgrounds and different expertises, I’m sure all writers have their own character interview questions. Where mine might be can this character change the oil in their own car, another writer might ask if their character can cook from scratch or what subject they teach in school. Cars speak to me, just as writing does. Combining the two provides insight and important details into the characters I’m writing and, ultimately, the story I’m telling. Cars may not play a large role in those stories, at least not on the main stage, but I’m back in the wings, and I know that my understanding of my main characters is all the better for asking these questions.

After all, you never know when a Green Beret might drive up to a compound in his 1959 pink Cadillac convertible, and then you’re going to have some explaining to do…